We had a great plan one weekend in November; to visit Parque Estadual do Morro do Diabo, in western Sao Paulo state. But things in Brazil often don’t work out as planned. We found out at the last minute that the park will be closed on Monday, which was the only day we could visit (we’ll be nearby for a roads/wildlife workshop where Marcel will be presenting).

While Marcel stayed in the apartment to work on his presentation, I decided to take an afternoon walk around Rua do Porto and Engenho Central (an old sugar cane factory that is now a cultural center for Piracicaba). There’s almost always a festival of some sort at Rua do Porto on the weekends, and this weekend it was a combined cachaça and seafood festival (though I’m not sure it’s such a great idea to combine large quantities of these two items). As I finished my circuit between the two bridges, I passed by the Casa do Povoador – a renovated house along the river that often has art exhibits – and the small ampitheater outside, where a a capoeira presentation was about to begin. I first noticed people holding strange musical instruments, and then I noticed the many capoeiristas mulling about dressed in white pants and white or blue t-shirts. If I understood correctly (I never know if I completely understand what people are saying in Portuguese), the capoeiristas were from four different schools (two from Bahia state, one from São Paulo and one from Piracicaba). From the quick research I did online, it seems that this was a roda de capoeira (basically a capoeira circle with music and two capoeiristas at a time “playing” capoeira inside the circle).

I went back to the apartment, grabbed Marcel (and he grabbed his camera), and we spent an hour or so watching capoeira and listening to music. According to Wikipedia, “capoeira instruments are disposed in a row called bateria. It is traditionally formed by three berimbaus, two pandeiros, one atabaque, one agogô and one ganzá.” I’m not sure whether this group had all of those instruments, but it had most of them. The music truly set the stage for the performance, and was usually call and response, with the singing from the crowd as important as the singing from the musicians (and the musicians regularly switched out with the people performing capoeira as well).

Yes, we were disappointed that we didn’t get to go to Morro do Diablo. But it was pretty awesome to get to watch a roda de capoeira – after all, capoeira is one of the most well-known aspects of Brazilian culture, and we hadn’t happened upon anything like this before. Even though things often don’t work out exactly as planned in Brazil, if you’re open-minded and patient, you never know what might happen instead.

Note: this slide show contains audio. The audio may not play on certain mobile devices. 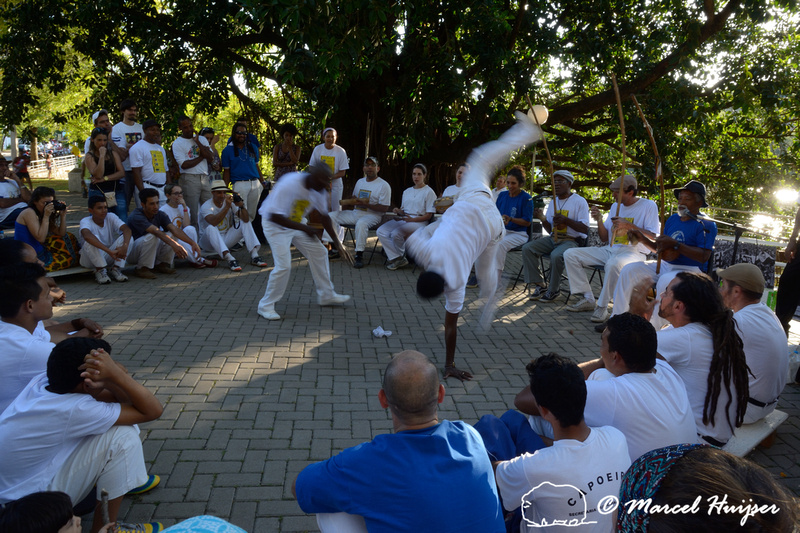